Transforming Coventry Station, to create an aesthetic gateway to the city that will accommodate increasing passenger numbers while enhancing passenger facilities. The scheme includes a new station entrance building, pedestrian footbridge and canopy extensions, as well as a multi-storey car park and bus interchange with pedestrian access tunnel beneath Warwick Road.

Coventry Station is a light and airy building, rebuilt in the 1960s and protected with Grade II listing. However since it was built, passenger numbers have increased substantially, doubling in the last ten years alone. The station is poorly integrated with other forms of transport and its facilities and appearance are no longer what passengers and city leaders expect of a gateway station.

Through the Coventry Rail Investment Strategy (prepared by SLC Rail) the City Council has set out its vision for the station and its immediate surroundings. To help the Council deliver this vision, SLC Rail were asked to help with its development and project management.

Coventry City Council recognised the challenges of the constrained site and the complexities involved in working with Network Rail and minimising the impact of changes to the station. In 2014 they asked SLC Rail to provide assistance with developing and delivering the scheme.

The team from SLC Rail advised and assisted Coventry City Council to become station investors and subsequently negotiated the various legal and commercial agreements including the basic asset protection agreement (BAPA) with Network Rail that allows Coventry City Council and its contractors to go on-site to investigate and develop options for the project designs. They also agreed the specialist resources that Network Rail would provide to support the design development.

During the concept design development stages, SLC Rail were particularly focused on:

The project management team from SLC Rail are working on behalf of the client, overseeing the project from GRIP stage 3 (outline design) to GRIP stage 8 (completion) including management of design and construction work, procurement strategies, liaising with stakeholders and managing programme budgets.

The Masterplan works have been split into two phases:

Phase 1: Enabling works, access tunnel and footbridge and canopies
Phase 2: Second entrance building, multi-storey car park, bus interchange
In July 2015, a final layout was chosen by the client for Phase 2 of the works and GRIP 3 works commenced utilising WSP as the designers procured through the Professional Services Framework.

The team at SLC Rail has secured the full suite of planning and listed building consents for the entire project.

Construction work for Phase 1 began on-site in 2015 with the demolition of The Rocket Public House and subsequently the construction of the access tunnel.

In August 2018, Buckinghams were appointed as principal contractor for design and build of Phase 1 and work began on-site in October that year.

The procurement process for Phase 2 is currently ongoing.

The order of delivery is: footbridge and canopies, multi-storey car park and station building and finally the bus interchange. 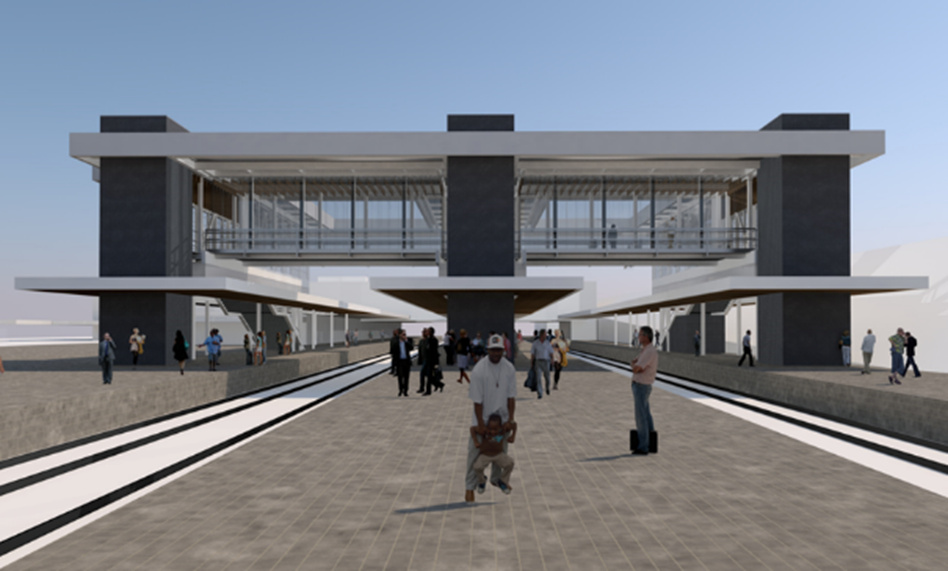