A community rail project to create two 11.5 metre train tapestries has been embraced by two employees from SLC Rail who have been involved in rail projects in Worcestershire.

The project will see 18 tapestry train artworks for display at stations across the county in the autumn and has been bringing together existing WCRP volunteers and new friends across Worcestershire to take part in this large-scale community tapestry stitch project.

Sam Uren, Engineering Director and Rachel Jarrett, Senior Project Manager, decided to put their crafting skills to the test after they saw the rallying call for stitchers to get involved in the project. 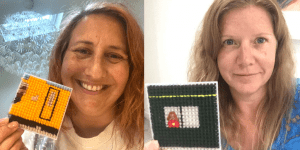 After display at stations, all the pieces will be linked to form two huge trains – each 11.5m long – to be exhibited initially at the Worcestershire Community Rail Partnership anniversary event in November.

Peter Chapman of Worcestershire Community Rail Partnership said:  “We’re delighted to see SLC Rail employees taking part in this event and I am looking forward to seeing Sam and Rachel’s contribution in the finished tapestries, which will be exhibited later in the year.”