SLC Rail HQ is buzzing this month following the delivery of one of our projects.  Some of the team were lucky enough to welcome the first trains into the new Stratford-upon-Avon Parkway Station on 19th May. The sun was shining, the station was opened a full seven months ahead of schedule and we were joined by John Harvey from Warwickshire County Council and Mark Lawton from London Midland to see the first revenue earning service call in at the station.

It is always exciting to see the plans, construction and lots of teamwork deliver something you’ve been working on from the start. There is something really special about the commissioning of the final development after months of treading the ballast; especially when the first trains roll into the platform.

The first train was brought in by London Midland driver Mark Aston, travelling to Birmingham on train number 172217.

“SLC Rail has provided an extremely valuable service to Warwickshire County Council in the development and delivery of Stratford-upon-Avon Parkway Station. The breadth of their experience and the high level of respect they have attained from the rail industry in the West Midlands undoubtedly helped in the opening of the Station 7 months early and on budget.”

For more information about this rail development, visit the Stratford-upon-Avon Parkway page in our projects section. 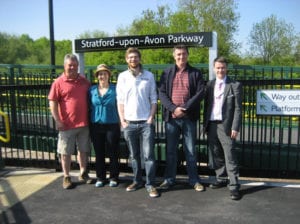