On Christmas Day, the A45 westbound road bridge over the West Coast Main Line was successfully demolished under the project management of SLC Rail thanks to a collaborative effort between Solihull Metropolitan Borough Council, Carillion Construction and Network Rail.

This was a critical step in the project to replace an old masonry bridge and increase the capacity of the A45 which already carries over 30,000 vehicles a day, serving Birmingham Airport, the NEC, Jaguar Land Rover and Birmingham International Railway Station.

Transport specialists at Solihull Metropolitan Borough Council recognised that the rail aspects of the project introduced substantial complexity and risk, not least because a significant part of the funding was dependent on the project being completed in good time, including the essential possession and demolition over Christmas 2015. The project also involved:

Solihull Metropolitan Borough Council hired SLC Rail initially to manage the rail aspects of the project. The Council later extended the remit of SLC Rail to assist with tendering, managing the project, providing on-site supervision, taking care of the complexities of stakeholder relations and managing the significant risks associated with the scheme.

The project was designed to minimise disruption to road and rail users. Prior to the demolition, the first half of the new bridge was completed immediately to the south of the old bridge and traffic was diverted onto the new bridge.

The next stage in the project is to build the remainder of the new bridge, completing a new, wider crossing. This is on schedule for completion in August 2016.

Councillor Ted Richards, Cabinet Member for Transport and Highways, commented, “This project has been very well executed and it is to the credit of SLC Rail that the works have been managed with so little disruption to the public.”

Ian Walters, Managing Director at SLC Rail, commented, “In our industry we ask a lot of the people who deliver projects, often in challenging circumstances and at unsociable times. There was a lot riding on this Christmas Day possession and I would like to thank everyone for their professionalism, commitment and real teamwork.”

For more information please see our A45 South Overbridge replacement project profile or contact us. 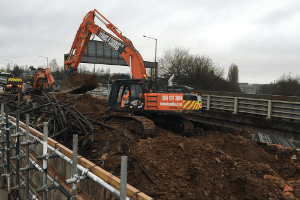