The steel framework for phase one of City of Wolverhampton’s new railway station building is close to completion. Foundations were laid in February, following the demolition of the former British Transport Police building, and a small section of the current station building next to Platform 1.

Once the remaining steel framework is installed, work will begin on lifting in floor slabs, laying the block work for the external walls, cladding the building and putting the roof on.

It is all part of delivering a £150 million transport hub to provide an attractive commercial gateway to those entering the city by national rail, bus or tram. 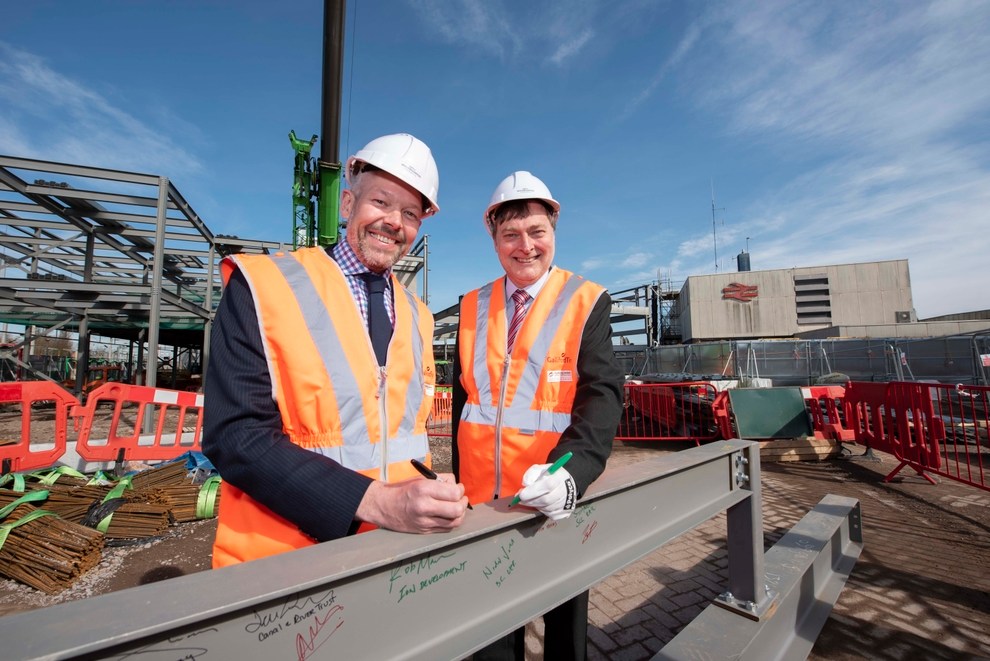 The first section of the new station building is expected to become operational to customers in autumn 2019, when phase 2 of the programme – bringing down the remainder of the current station building and completing the new build – will also start.

The new state-of-the-art railway station building to serve the city will be fully open in summer 2020.

Councillor John Reynolds, Cabinet Member for City Economy, said: “There is more than £3.7 billion of investment on site or in the pipeline across the city, and the railway station development is a big part of how we are re-imagining and re-inventing our city centre.”

Malcolm Holmes, director of rail at Transport for West Midlands (TfWM), which is part of the West Midlands Combined Authority (WMCA), added: “Seeing the steel work go up is a symbol of the on-going regeneration of Wolverhampton which is clearly a city on the up.

“Not only will the new station provide an impressive gateway but with the Metro extension stopping right outside will also provide a seamless connection to trams and the bus station. It will, of course, also offer a fast connection to the region’s two HS2 high speed rail stations from 2026.”

SLC Rail is working with Wolverhampton City Council and the West Midlands Combined Authority, acting as programme coordinators for the whole interchange programme. Acting as client representatives for the City Council, the SLC Rail team has broad responsibility for the project deliverables and budget.