SLC Rail has been appointed as specialist rail advisors to Worcestershire County Council, under an agreement worth up to £2.5 million over four years.

The Council has made the specialist rail appointment following several years of working together on individual rail projects, including development of the new Worcestershire Parkway and Bromsgrove station schemes.

Under the agreement, the priorities will include delivering the new Worcestershire Parkway Railway Station through to opening, due in 2017.

A history of success with local authorities in Warwickshire and Solihull

SLC Rail has been supporting Warwickshire County Council and Coventry City Council under a similar rail advisor framework agreement since 2013, which was renewed earlier this year and now runs until July 2017. Under this framework, SLC Rail has developed and delivered numerous rail schemes, including the development of a new station scheme for Kenilworth and the development and delivery of the new Stratford Upon Avon Parkway station – opened seven months early.

A further rail advisor framework, awarded by Solihull Metropolitan Borough Council in June 2015, sees SLC Rail helping to develop rail strategies in line with the council’s ambitious ‘Solihull Connected Green Paper’. Under the framework, SLC Rail is continuing to project manage the replacement of the A45 road bridge over the West Coast Mainline.

Reactions to the announcement

Ian Walters, Managing Director of SLC Rail commented, “We delighted that Worcestershire County Council have formalised our excellent working relationship, paving the way for a wide range of improvements to rail services across the county and in particular enabling us to take Worcestershire Parkway station through to completion.”

Simon Geraghty, Deputy Leader of Worcestershire County Council and Cabinet Member for Economy, Skills and Infrastructure, added, “Rail will play an important part in realising our ambitious plans for Worcestershire’s economy. SLC Rail brings extensive rail experience and they have shown to deliver real value as partners to local authorities.”

For more information please see our Worcestershire Parkway project profile or contact us. 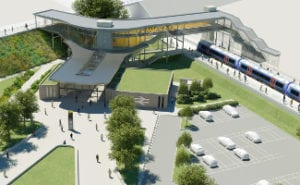