Contractors, Carillion, under the management of SLC Rail started work officially at the site of the new A45 road bridge, with the Spade in the Ground ceremony today (12th March).

This project, with Solihull Metropolitan Borough Council, will see the A45 road bridge doubling in width to provide increased lane widths, a dedicated airport slip lane and pedestrian and cycle access. Additionally, the bridge is designed to allow the potential future expansion of the West Coast mainline with a large enough span to accommodate four tracks.

The first phase of the project involves building half the width of the proposed bridge and transferring vehicles from the current bridge before demolishing the old bridge over a 54 hour possession of the railway at Christmas 2015. Work has started by rerouting BT, water and gas services which run along the old bridge and preparation work for the piling foundations for the proposed bridge abutments. 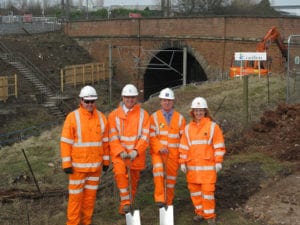